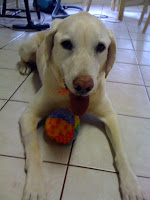 I've had some folks ask for an update on Jake and thought it would be easier to put some info here instead of writing numerous emails over and over again. . . .
Jake is doing remarkably well. He's gaining weight, he still has about 6 pounds to go, and he is loving his new canned-food-only diet! Today he picked up one of Trevor's (my Jack Russell) balls and tossed it around. He's not a ball dog. Lots of Labs are, he's not. So it was funny to see him playing period but even funnier that he had a ball!

He also felt good enough to dig a hole under the fence to chase after Trevor. Trevor has taken to digging into the neighbor's yard. Thank goodness it's into another yard and not onto the busy, busy street that our back fence backs up to. However, digging is not good no matter where it is! Arrgh, the pain of fixing my yard! Funny thing is that when Trevor digs out Jake goes bonkers. Jake is a quiet dog and if he barks in the yard I know for sure that Trevor has escaped. Then Jake frantically digs after Trevor and even eats the bottom of the fence boards. It really drives him nuts.

I had a refrigerator repair guy out and had shoved the dogs outside while he was there. As I'm talking with the man I hear Jake's desperate bark and I say, "Excuse me one of my dogs just dug out . . ." He looked at me, "Oh. How do you know that?" As we couldn't see the fence from where we were standing. I said, "My Lab tattles on my Jack Russell!" and whisked out the door to find Jake digging after him. Trevor is back and Jake is now resting to settle himself and cool off.

Bottom line: he seems to be back to his old self again!
Posted by The Redheaded Dog Trainer at 1:13:00 PM