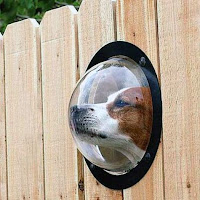 "My dog loves to look out of the window all day..."  This is something I've heard many, many times over the years and it makes me kind of cringe.  One of the most horrible inventions was the bubble that goes on the outside of the fence, called a Pet Peek.  This lovely little invention has it's own website and a very nice website at that, the name is even trademarked.

So what's the big deal?  Can't a dog get a view?  The deal is this--most dogs don't enjoy looking out a door or window or peep hole, humans do.  We like to look out and see a view.  We like to have a window to let light in, or a glass door to our home's entrance. For those who have a very attractive view (beach? ocean? beautiful trees? lake?) it's even that much more lovely for us. Humans.  For dogs this is a whole different ball of wax, if you will.

Dogs do this because they get a pay-off from it in an entirely different manner than we do. It is fairly uncommon for a dog to calmly look out of a window/door without a lot of arousal (and it can also attribute to some major behavior problems too!) when there is any sort of moving stimuli outside.  This could be anything: bikes, cars, dogs, squirrels, cats, people, strollers, skateboards, scooters, and the dreaded mailman.

I have a client currently whose little doggie has several issues and after I had been there for a while I noticed the blinds at the bottom of her door were torn up (she has a little terrier mix so this was where the dog could reach the blinds).  I said, "Does he look out that door a lot?"  She says, "Oh yes. All the time.  He really likes looking out there!"  I said, "No he doesn't.  Look at your blinds..."  Not to mention the dog's main issues are barking at other people and dogs when on a walk.  However, the dog's issues were exaggerated even more in the house as he still had the paranoia of people and dogs passing by and he had to watch to chase them off.  Yes, dog barks, people leave (in the dog's mind anyway) and the dog feels he just did his job chasing them off.  She calls a week later, "Oh my gosh the difference in his behavior, especially indoors, since I blocked his view to the outside has been remarkable!"

Allowing dogs to look outside all the time is usually incredibly stressful and frustrating to a dog.  It's not calming, it's not enjoyable.  They are highly frustrated that they cannot get to the stimuli that they so desperately stare at all day long.  For some dogs the human purposely puts them in this situation by placing their crate in front of a window or leaving the blinds up so they can stare outside all day long.

All of this also applies to dogs outside who can see out of a fence too (hence the hatred for the Pet Peek window), which is probably even worse than indoors as the sounds around them will start to become triggers and build the frustration even higher. Think dogs next door barking too, dogs down the street chiming in, cars, people yelling for them to shut up!.... It's enough to make you want to scream, or bark, or become aggressive. Pick your poison.

If you have a dog that is purposely placed in a situation where he can watch or look outside while you are away ask yourself this to determine if you think this is a good idea:

If you answered "Yes" to the above questions then your dog is probably just fine doing what he does.  But if you answered "No" to even one of those then your dog shouldn't be allowed to look out of a window/door/fence to just watch the world go by.  No, it's not cruel.  It's setting your dog up to be relaxed and adjusted to living peacefully in your home and the real world.  It also sets your dog up to learn how to deal with outside stimuli.  Your dog will probably thank you for it.  Right now your dog thinks--Gee I get to watch Jane Doe walk Fido down the street again today all while I'm on the other side of this stupid door! Arrrrgh.  Drives me mad. Also that's why I pee on mom's rug and chew on the baseboards! When will she learn?!!

Don't set your dog up to fail. Don't ever set your dog up to fail if you want to be successful at anything with your dog.  If your dog already has barking issues, or worse issues like reactivity (indoors or out) or aggression, then block all outside viewing.  It may require baby gates somewhere or ugly partitions somewhere but if you want to change your dog's mental state and alter his behavior for the better then start there.  This won't fix a behavior issue, if you have one, but it will be a place to start. (Great website for attractive window coverings, click here.)

Who says a room with a view is always lovely?  However, if you live in the Maldives you need not block the view for any living being... just live with the barking!

In the Dallas/Ft Worth area? Contact me.
Posted by The Redheaded Dog Trainer at 11:59:00 PM No comments: