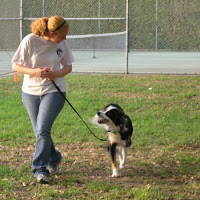 Well, my last post about Jakey tore at many heart strings, of course mine the most as I was under the impression at the time that I only had days or weeks with him.  That was at the beginning of December and here we are almost 2 months into 2011.  I took the photo of Trevor, Jake and Noah today (Sunday, January 23rd) as they so politely lined up for me in my bedroom doorway and posed for a photo (thanks boys!)
Jake is still around.  Don't get me wrong, he's 15 pounds underweight and looks just awful but we have some hopeful things going on right now. . .
At the time I had left the vet's office that day, Friday, December 3rd, (which was an internal medicine doctor whom I was referred to by my regular vet) I was a total wreck. I cried all the way home and for about 2 days after that.  I just accepted that he was on his way out even though I didn't want him to go.  I would sit on the end of our bed, sobbing, and just think -- I'm not ready, what am I going to do without this dog?  He's been so great, he's helped me with a lot of my training, he's helped a lot of aggressive dogs and most of all he's been the best pet anyone could ask for.
But one day after Christmas I was looking at him and it dawned on me that this guy really had beat some odds already and there had to be someone out there that could find out why he's dropping weight like crazy and not showing any classic symptoms to anything that we have been treating him for.  So, first I turned to my now friend and very trusted surgeon that had done 2 of his 3 surgeries and asked her if there something someone could do?  She suggested that I contact my regular vet and discuss and we could put our heads together.  I also thought to myself -- Maybe I can get a babysitter for a few days and drive down to Texas A&M and see what the vet school could do for us.  I even got my calendar out and tried to see where and when I could do that.  I would make it work if I had to but my calendar wasn't cooperating with me.  So I waited to hear from my vet.  She called and we decided on a few new things to try and she also said she was going to try to get a hold of a remarkable GI specialist, one of the best in the country, at Texas A&M.  I was so excited about that and realized I was in fact on the right track there!
I had been doing online searches and of course all I could find were diseases that fit him except for one thing--they all had the symptoms of chronic diarrhea.  He never has had that.  Vets have been a little confused by it too because he has had so many GI problems they are amazed that he's got normal bowel movements.  But nonetheless I wanted to try to treat him for a disease known as EPI (Exocrine Pancreatic Insufficiency).  Basically the dogs pancreas doesn't produce enough enzymes to properly digest and breakdown food so they are starving all the time and eating normally (so is Jake!), losing weight dramatically despite a healthy appetite (so is Jake!) and have horrible diarrhea (hmm, not Jake).  I asked my vet if it would hurt at this point to try to treat him for it.  She said no and said she'd order the pancreatic enzymes to add to his food and see what we could do.

Then I got an email about 10 days ago from Jake's wonderful surgeon that she had received an email from the vet down in Aggieland and he suggested we try him on some aggressive antibiotics and see if he has some bacterial overgrowth in his intestines.  This could mean he has yet another disease I also stumbled upon in my research known as SIBO (Small Intestinal Bacterial Overgrowth).  There have been no diagnoses, we are just treating things as last resorts to try and get this guy figured out!

We just started him on these antibiotics last week and he's been on the pancreatic enzymes for 10 days.
Today I weighed him and for the first time he's either the same weight or has gained a pound. I can't be certain as I weighed him on a human scale by weighing myself and then holding him and weighing us together and then doing the math.  My calculations showed he gained a pound. I had my husband do it and his calculations showed him as the same weight he was last week, a sad 51-lbs.  But either way it's the first time he hasn't dropped weight in 2 weeks!  I took this as promising and I'm looking on the bright side right now.
Jake acts completely normal aside from how he looks.  So I'm hopeful that he'll gain weight back and live on with us until it's truly time for him to go . . .
I took these pics and video of Jake tonight chewing on a bone.  You can see how happy he is., so happy in fact he is completely ignoring me because he loves that bone so much! It's a little startling to see how skinny he is for anyone who saw Jake before.
Posted by The Redheaded Dog Trainer at 11:20:00 PM 2 comments:

Hope you all read my newsletter . . . I haven't' received any entries for my contest so I'm hoping you all are working so hard that you haven't' sent them in yet!  Here are the details for anyone who forgot or maybe didn't get them.  Better hurry, only 12 days left!
To get you going on our Train Your Dog Month we want to offer a contest!  Train your dog to do 2 new & fun tricks & show us how you did it to be entered to win a nice prize (it's a surprise)!
Rules & Details
1) You must only submit 2 different tricks your dog doesn't know already.  Video you starting & finishing the training successfully.  We need to see how you trained each trick & your dog completing each of them successfully.
2) Tricks can be anything that is outside of normal obedience.  Normal obedience is defined (by us anyway) sit, lie down, stay, walk on a loose leash, leave it, wait, come when called. Do not show us any obedience as a trick, we will not use them in our judging.
3) Your dog can be any age, any breed.
4) Submit your video by email or upload to YouTube & send us the link no later than 5pm, Monday, January 31, 2011.  Give us your full name, address, email, dog's name & breed.  All of these things must be included in each submission.
5) Submit all entries to: stacy@aictdfw.com
Examples of Tricks
Here is a list of tricks that you can teach your dog, of course you can be creative & think of another.  This list is just for suggestions.  Tricks can be endless.  Tricks can also be simple or complex.  Use your imagination!
Posted by The Redheaded Dog Trainer at 9:32:00 PM No comments:

For those of you who aren't aware . . . I won 2nd place out of 28 nominees in the WFAA's A-list BEST Training category for 2010--thanks to all who voted and supported me!  I'm really are proud, can't complain at 2nd place!
Also, I'm excited to share that I'm  giving Adventures in Canine Training a major make-over--new logo and soon new website (done professionally instead of a "this'll do" by me).  These things are a bit pricey so one step at a time but the logo has been in the works for months, probably since September.  I just got the completed logo (that I truly loved) after going through 2 graphic designers and 2 illustrators.  I ended up using the illustrator who did my current logo. 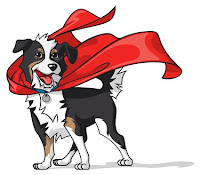 I have been asked why I'm changing the logo because the current one is very liked by many.  I just want to make something new as I'm trying a lot of new things this year for my business and I'm back to being all alone  in my ventures, as Misty has moved to Austin and has a full-time job there.  Michelle was one of my other independent contractors but she has several jobs and is a busy lady, so training has taken a back seat for her as she pursues ventures that she loves more dearly.
The new logo portrays one of my own dogs, Noah, my Border Collie/Australian Shepherd.  He's a handsome guy and the illustrator felt he'd be great for a logo dog with his coat of many colors and his glowing personality.  I also wanted to stay along the lines of my business name, and really utilize the "adventures" part.  This is why we came up with an all new adventurous logo . . . Noah in a cape!  Let the adventures begin!  I'm playing with slogans but came up with . . . "Every dog is a superhero . . . you just have to find what makes his cape fly!"  We'll see . . .
Here is a picture of Noah that looks a lot like the logo. 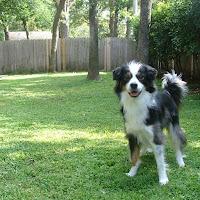 So, stay tuned for new adventures, fun things & great dog training from Adventures in Canine Training . . .
Posted by The Redheaded Dog Trainer at 9:08:00 PM No comments: