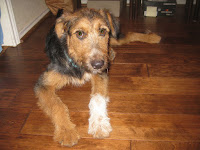 For all you loyal followers of this blog . . . first, you know it's been way too long since I've posted! You also know that I participated in this wonderful and sadly under-advertised event in 2009--the Extreme Mutt Makeover.  My blog started from the beginning of my journey that year and took you to the end.  In 2009 it was a 6 week project, now it's an 8-week project.  Here is where it started in 2009.
It's evolved from that year, as that was the event's "pilot" year.  What is this event anyway?  Well . . .this year there are 16 dogs competing.  The event is paired with The Extreme Mustang Makeover over the course of a weekend, this year being September 16-18.  The dog part of the competition, The Extreme Mutt Makeover takes 16 dogs from various shelters across the country that are sitting, waiting for a home.  Each dog is carefully temperament tested and evaluated and then chosen to take part.  Trainers apply, have to be accepted and then they draw a number and are paired with a dog based on their number.

Each trainer has 8 weeks to train their dogs and then will compete in 3 preliminaries and the top 3 competitors (based on 3 judges scores) will then be sent to a final round when all the mustangs compete for a major cash purse on Saturday, September 17th.  After the competition is said and done the point of this whole thing is that these dogs are showcased, trained and up for adoption.  They also want to show that shelter dogs from all walks of life can be trained to be perfectly wonderful companions -- and even to do some really spectacular things, you'll see if you come watch the competition!

This year I came in one week late in the game.  I went back and forth with myself asking if I had the time for this, the mental and physical stamina, blah, blah.   Each dog selected has their own Facebook page (all of them are listed on the left column under "Likes") and so I've been following them since they were selected and before any trainer had been chosen for the dogs.  There are a ton of darling dogs in this year's competition!  I am even ecstatic to say that a Pitbull made it into the competition and came all the way from California (his name is Hitch, you can follow his page here)!!

Anyway, one of the dogs really caught my eye ("Jazz") with her darling face and single white paw.  She also reminded me a great deal of the darling dog I had the first time I did this 2 years ago, "Harry".  She's fuzzy, medium sized, young and sweet.  The day the trainers all went to draw their dogs they had a live video feed of the drawings.  I was doing work on the computer that day (Saturday, July 23rd) and so I watched some of it while working.  I thought I never saw anyone get paired with Jazz.  So I went to her Facebook page and made some comments.  One of the ladies who volunteers for the Humane Society of North Texas (who basically invented this event for the dogs) ended up taking her home with her as a trainer dropped out last minute.  She planned on teaching her some stuff but wasn't going to officially compete with her.  She emailed me and said, "Stacy if you want to compete still we had a trainer drop and we could pair you with Jazz."  I thought, thought, thought.  I really wanted to do it! 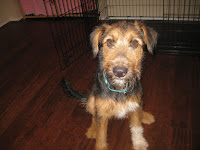 So today, Saturday, July 30th I met with Vickie and picked up Jazz around 5pm.  The competitors have 8 weeks to train their dogs.  I lost a week since I came in a week late.  But Jazz and I plan to jazz things up and get the ball rolling! (Pun intended!)

Watch my blog for updates on Jazz, her training and life in my busy and hectic household for the next 7 weeks!  Also Jazz needs as many "Likes" on her Facebook page as possible.  The dog who gets the most Likes receives $500 to donate to the shelter they came from!  Send her page to everyone you know!  I'll also update her page very often too.  And most of all . . . come watch us on Saturday, September 17th showcase our great stuff . . . not to mention all the other wonderful trainers and their dogs!  It's a fun family event!

Here is the amazing professionally done video they had made for the year we did it.  The black Lab in the video won that year.  Each dog that is horribly sad in the shelter scenes in the beginning are the actual dogs that were in the competition that year! (Um, be ready for a couple of tears from this!)

2009 EXTREME MUTT MAKEOVER from BBAERO on Vimeo.
Posted by The Redheaded Dog Trainer at 11:01:00 PM No comments: