Do you ever talk to your dogs?  I know I do. I talk to them often . . . I tell them they are cute and ask them where my keys are, I know they know. They saw me put those keys somewhere!  However, when I'm training my dogs to do something I don't say much.  I wait for the offered (wanted) behavior and I then give feedback.

I've noticed lately that dog owners talk too much to their dogs.  Sometimes even when not training when they are speaking to their dog I notice the dog is becoming either annoyed, agitated or shut down due to all the babble.  Sometimes we just need to stop talking! 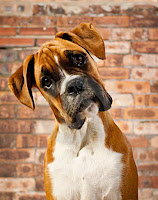 When training feedback is given in overabundance because we are humans with voices.  Our first response when a dog doesn't "get it" is to say it again or give a lot of verbal feedback.  Most of the time, if not all of the time, this impacts the training process in a negative way.  The dog usually becomes confused or non-compliant.  When this happens the labels and blame-game starts flying around — "My dog is so stubborn!" "Oh, he knows what to do, he just won't do it!" "She's doing this on purpose!" "He doesn't listen to me ..."

This is where training gets super muddy. This is also why so many people fall back on punishments when the dog isn't "getting it" and seemingly "not listening" or "being stubborn".  The reality is that we are giving too much feedback at the wrong time.  We are causing the dog's confusion and lack of understanding ... which is then mislabeled as "stubborn" or "non-compliant".

So, when you are training your dog follow these rules in your head, I call it WAGS.

1. Wait for processing
2. Allow for concepts to form
3. Give feedback when a tiny behavior in the right direction occurs
4. Start making progress in your desired outcome

Before training ask yourself these things:
1. Does your dog know what you want him to do?
2. Have you taught your dog the behavior that goes with the cue (sit = butt on the floor)
3. Have you rewarded that behavior so that it's repeated?
4. Have you added a verbal cue to a behavior at the appropriate time so that dog understands the connection? (Remember: Dogs don't know English, we have to put behaviors first, then words to those behaviors!) 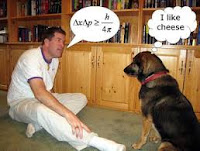 When you say too many words to your dog it's usually because you are trying to get the dog to understand something.  For example, I so very often see people request that their dog "sit".  The dog may or may not really and truly understand this cue to mean put your butt on the ground until told to do something else.  So the dog will often stand there for a second and when they don't comply immediately the dog owner then states it again, "SIT!", usually with a tad more gusto.

This isn't actually teaching the dog anything and it's diluting the sit cue.  Saying it over and over doesn't make the dog understand it better.  Often the dog may sit after the 2nd or 3rd request.  This doesn't mean they were "stubborn" the first time you asked it means they were confused and unsure what you meant.  They did it the 2nd time maybe because they just decided to sit, or they offered something that has worked for them in the past or they've been rewarded for sitting on the 2nd request and so they assume the cue is "sit, SIT!"

So, when training something that is new to your dog try to remember to only focus on the behavior.  The behavior has to be reliable before you can put a verbal cue to that behavior so that the dog makes the association with the behavior and the cue.  All the feedback in between can be muddying the whole process since our dogs don't understand verbal language as we do.

If I'm quiet then how does my dog know what I want?!
Great question! I knew you were wondering ... Well,  you reward the behavior(s) your dog offers that lead up to the behavior you desire.  This is actually a technique called "shaping".  It's quite effective in getting reliable behaviors without luring or physical prompting. I do lure some behaviors, however, I don't ever physically prompt a behavior (this would be like pushing a dog's rump down physically to make it sit).

So what does that look like?  Let's say you're teaching your dog to lie down on cue. She's never learned this.  She does know "sit" but "down" is a bit different.  So you could shape it by marking each little behavior that is in the direction leading up to a "down".  This might be the dog looking down to the ground. If you are using a clicker, then you click the second the dog looks down and toss the treat. You say nothing. Zip. Just click and treat.  Then you might do that about 4-5 times. Then you will say -- to yourself internally -- hmmm, I'm not going to click you for looking down now I want you to do something else that is leading to you lying down.  So you might sit there for some time because you're saying nothing. You are simply waiting for your dog to offer a behavior. It might be a paw stretched out some or shoulder blades going down.  Anything.  You're still saying nothing. You are only clicking and treating as each behavior you like occurs.

Now, if you're not savvy with a clicker or shaping you might be thinking right now -- good grief! This sounds tedious and long-winded just to do a lie-down cue!  Why can't I just put my dog into the down position and reward him then?  Or can't I just lure the dog down with a treat and reward him when he goes down?  The answer to the first one (physically prompting) is no, the second one (luring) is yes.  It really depends on the way you teach.  However, my bigger takeaway is that you aren't saying anything while you're teaching this ... unless you are using a "Yes!" as a verbal marker (which would replace a clicker).

This really gets your dog's brain in high gear. This allows your dog to think. To make decisions on his own.  It has him being what we call "operant".  They will start to offer behaviors when training. It will make your training soooo much easier and quicker. While the above scenario of teaching a "down" cue sounds long and tedious when it's actually done it's not.  Maybe a few minutes?

Without saying anything during this process, and only allowing your dog to think on her own, we are getting a behavior more reliable because the moments we do give feedback are the moments we want repeated.  It also alleviates all confusion.  If in between all the times I was trying to get the dog to lie down I said "No, down!" or something else, I'd be throwing out too many things at this non-verbal creature.  The poor thing would be utterly confused. And when done too often we can see a dog that really wants no part of training.  These are the dogs I see very, very often labeled as "stubborn".

Now go try it.  Report back. Did your dog respond better when you only gave the appropriately timed feedback? Did you notice how difficult it was to be quiet?!  Let me know, I want to hear your experiences!

Posted by The Redheaded Dog Trainer at 1:24:00 PM No comments: