Diamond in the Ruff.

Well it's taken me a while to write this, but I wanted to share. My dear friend Lee Mannix, who was also the greatest dog trainer and my mentor, was tragically killed in a car accident on Sunday, May 2nd. I suppose I never realized how much I cared for that man as, of course, it never crossed my mind that I would lose him. But his death really has been hard on me. Driving home from Austin that week I think I drove through a sea of tears most of the way back to Dallas . . . 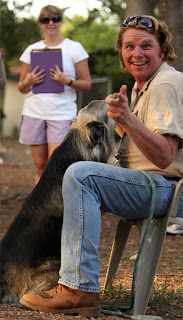 For those who had never met him you can read all about him. You can read how great he was, what a true gem he was, but no one can explain what a remarkable guy Lee was unless they had met him.

I suppose he reminded me of all the guys I knew back home. He grew up in Midland/Odessa and I grew up in San Angelo. So we both are from West Texas. He was as Texas as they come. He had red hair, a dirty well-loved cowboy hat and a pair of boots that you'd never see him without. His lip would be filled with chew 99% of the time and if he wasn't training dogs he'd be having a cold beer at his place on the Blanco River. He just clicked with me on so many levels -- dogs, West Texas and humor. You could never get by that guy without some joke, or story or something that you would never forget.

I met Lee for the first time in 2004 at a dog camp down in the hill country near Kerville Texas. It was a place where people brought their dogs and joined daily activities, sports, training classes, hiking, etc. All you did was have fun all weekend with your dog while teaching and learning something. That year I was asked to be the instructor for the obedience classes. It's held at an old, old girls camp where there are buildings with no AC and full of about 6-8 bunk beds. You grab a bunk and a cabin on a first-come-first-serve basis. I found a cabin that was occupied by Lee and his trainer, Kimberly Burgan. That weekend changed my life forever.

When teaching one of my classes at camp I noticed this big, red-headed cowboy sitting in the back of one of my classes and he made me a little uneasy. Later I realized he was one of my bunk-mates. I heard him talking dog talk to another person and immediately thought he sounded incredibly knowledgeable in dog behavior. Later that day a camper's dog got attacked by another dog and Lee became frustrated at the lack of organization of the camp and dogs that were there. At dinner one night he stood up and said, "If anyone wants to listen I'm going to do a behavior talk after dinner outside at the picnic tables . . ." Every single person in camp showed up and he talked for 4 hours about aggression issues he saw with some dogs among other things. The woman who owned the dog that attacked the other dog was being addressed and Lee was telling her what she needed to start doing at home with the dog. I remember he had me after this . . . he says, "Where does your dog sleep?" Dog owner: "In the bed with us" Lee: "Not anymore, he's going to sleep in a crate." Dog owner: "At night?" Lee: "That's when you sleep ain't it?!"

At the end of the weekend Lee said to me, "I think you have a lot of potential and I'd love for you to come to Austin and follow me around sometime . . . " And I did just that and continued to follow him and learn from him ever since then.

I've been training dogs now for 11 years. I've seen a lot, I've learned a lot and there are many, many qualified and well-known dog trainers out there. I could list many that have published many books and who speak all over the country at seminars. These are very good trainers and anyone that is a dog trainer on a professional level would know these people by name. I could easily try to learn more under them and label them as my all new "mentor" but there was just something about Lee.

I can't put my finger on it. I can't put it in words or explain it. If you ever had a dog that went to him for any training you know exactly what I'm talking about. He was just truly magical. He was truly one-of-a-kind. He only wanted to help the dog, and moreover, help the dog owner learn how to properly do that. He would go out of his way to do many things. 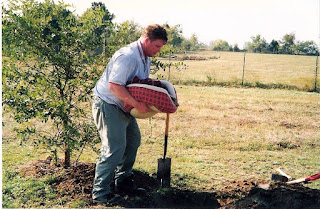 At his memorial there was a slideshow of many of his friends, clients, dogs, etc. I think the one picture of the hundreds that were on there that touched me was this one where he's burying one of his clients' dogs for her in her backyard. The woman said that her dog had died and Lee was the first person she thought of. She called him up and ". . . he was there in minutes." He went to her house and buried her dog in her yard, as she wanted. I don't know why but this picture really made me realize what a marvelous man he was, or rather, reminded me . . .

The way he understood and trained dogs was non-traditional. He would never use any scientific terms and if you spouted one to him he'd most likely say, "I don't know what that sh#@ means, but this is what I'd do . . ." He always thought the science part of dog training was too complicated, more so than it needed to be, and he always said, "I can train a dog without all that . . ." And he could, and he'd do it right too. (Don't tell him he did in fact use science in dog training, he doesn't know that . . .) 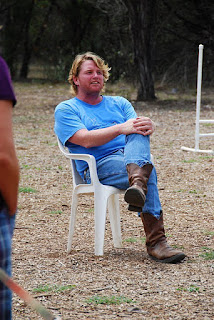 One thing you would hear him say was, "Praise your dog, G.D.! Praise your dog!", always adding a few expletives if you weren't praising or talking to your dog enough. He'd say, "You gotta tell your dog when he does it right . . ." I can't tell you how right he was. We so often tell our dogs when they are wrong but when do we say "Good boy!" Not often enough. He trained using rewards and praise and teaching you how to truly build a bond with your dog.

This man trained aggression out of a dog like no one I've seen. Most of the trainers these days use some sort of crazy corrections or slap an electronic collar on your dog, or take years to work through aggression. This man did none of those things. He used the relationship you had with your dog, calming signals, body language and a good read on the dog and he'd have an aggression case mastered in a matter of weeks. Of course this also depended on the dog owner's and their part, but assuming the dog owners were doing their part and coming to training as Lee suggested, then you could see a completely new, confident and happy dog in weeks.

I use his methods all the time in what I do and because of this I have grown my business to earn me a reputation in the Dallas area. I never knew how much this man taught me and how much I learned about dogs. I still have so much to learn and it hurts me to know I can't have him around to teach it to me. Sure, I could call on a number of 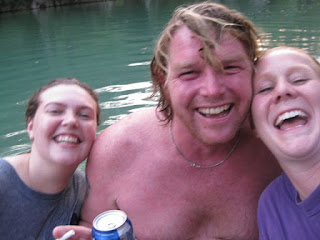 very qualified and good dog trainers but there is simply no other Lee Mannix, and never will be.

He was simply a fun, goofy, sometimes-pain-in-the-you-know-what, redneck who always had fun and never missed a beat. He did not only what he loved but what he was remarkable at in life, and that is very rare to find . . . in his work he showed how much he loved his job and how good he truly was at it. He was a genuine diamond in the "ruff" . . .
Posted by The Redheaded Dog Trainer at 9:12:00 PM 1 comment: