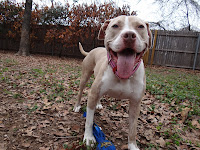 "Silly Pants" was what I so goofily and lovingly called my foster Pitbull, "Pinky".  She was a real silly girl, opening her crate she was like a bull in a china closet.  She was stout, short, sturdy and strong.  She was also sweet, tolerant, and whip-smart.  She let me use an electric dremel tool for her toenails without fuss at all. She asked for sweet belly rubs every morning before her first potty break.  And she would give you loads of ear kisses when you wanted her to, or when you didn't. ...I loved that damn dog.  She was a pain in my ass but I loved her.

It's taken me quite a while to write this because she drifts in and out of my head a lot. I won't lie, I wanted to keep that dog. I wanted to make her the Pitbull that everyone could look at and say, "Pitbulls are GREAT dogs, I don't get the hype!"

I fostered Pinky for 9 months -- from January 2012 until late September. I didn't stop fostering her because she was lucky to find a home. I stopped because I couldn't do it any longer after discovering I was pregnant with my twins and not being able to do a whole lot physically for anyone let alone her little busy self!  And I felt like I really failed her.  Like me fostering her was all for nothing.

I always remember this quote from Dr. Suess when I think of her, because tears will stream down my face when I think of losing her; how I feel like I failed her.  I know that she was probably another statistic and I'm certain she didn't make it into anyone's life. However, I think of what she did in fact do for me and what I in turn did for her, even if for only a moment.  That little tank of a Pitbull taught me a lot about life, love, dog training and stereotypes.

"Don't cry because it's over, smile because it  happened." -- Dr. Suess 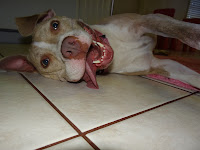 So the story goes ... I had lost my sweet Lab, Jake, on January 1st and I was filled with sadness and grief.  I didn't want another dog but at the same time I did, then I thought -- Good gosh I've been in the dog world  for over a decade and I've never once fostered a dog!  So I decided I'd do something good.  And very coincidentally I found a picture of this darling Pitbull named "Pinky" on Facebook that was in desperate need of a foster as she had been living in  boarding in a vet clinic but they could no longer keep her there. She was also mentally going a little wild without proper exercise and training simply due to lack of resources. The vet staff there were very wonderful to her and they loved her like their own but she just had no where to go to be more enriched both physically and mentally.  So I stepped in when they put up a post on Facebook about a desperate need for a foster for her.

It was noted that she was not known to be good with some other dogs and so she lived with me, completely isolated from my own dogs and any dogs that came into my house at the time.  I had no problem with that.  She had her own time out in my house with us, and my dogs would either be outside or crated while she got "Pinky time".  I would train her, play with her and let her just be crazy. She was full of energy, tons of it. She was great with toys and played well with them.  After I taught her how to "drop" on cue she would play very well with me too.  Before that she'd just play alone.  She had zero guarding issues, i.e., if you came near  her when she had something or was eating she could care less.  She was great with my daughter, who was 3 years old at the time.

I did learn that she was afraid of people when they approached her first and didn't allow her to greet on her own time.  And if you used a high-pitched voice she became very agitated and scared and would become defensive.  She would nip when someone tried to walk away after a greeting that she didn't feel comfortable with.  I learned this the hard way the first time as she did this in my house when my dad came to visit.  He wanted to meet her. I was stupid and let him just let her out [of her crate] in my bedroom and he started kind of sweet talking her. She started barking at him, afraid, as she was backing up while barking. He was sitting down on my bed.  However then he got up to leave and she nipped him on the back of his leg.  Yeah, way to go dog-trainer-expert-now-foster-mom! 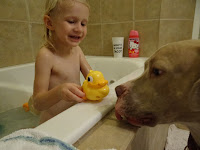 She had met my sister, my 4 year old nephew, my mother and my step-dad without issue at all.  In fact after several minutes she was initiating attention and licking all over them.  The only thing I finally put together was that they never interacted with her first, they allowed her to come to them. When they first met her they did nothing, they ignored her.  So I knew that I could easily work on that with her. ... Then time passed, and things got where I wasn't able to work on that specifically with her.

But take note. She was not aggressive. She was scared and acted as any scared animal would -- defensively when she felt like she was most vulnerable.  Aggressive did not describe this dog.  She was not that at all. She was misunderstood and needed to learn a different response to have when people approached.  That's all. Unfortunately I didn't have the time to do that training with her and strangers.

I did work on several things with her in regards to training. She was amazing at going to the mat. She would default to it I worked on it so much. She found her mat to be quite rewarding and comforting.  She learned to wait there on her mat until I released her.  She had her very own bright pink bath mat that I got just for her.

I worked on her leash skills, her drop, sit, down, stay and recall (come when called).  She was a quick study and loved to learn.  She also loved to toss her toys around and play by herself. She was goofy and funny.  She was all or nothing. She would bolt out of the room, toy in mouth, run circles then come back and you had to brace yourself!  She was all Pitbull, 100%.  Loyal to me, and my family.  And cautious around other dogs, sometimes  aggressive in nature.  She was a typical bully breed.  She wasn't going to be the dog for just anyone!


And so I come back to the Dr. Suess saying -- "Don't cry because it's over, smile because it  happened." 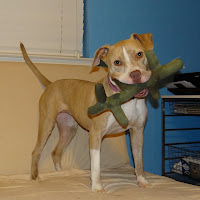 Here is a video I never did publish. I just uploaded it for the first time to YouTube.  It's me and Pinksters at the Shade Whitesel working dog seminar in Missouri last summer (2012).  This video is cool because it shows you how to do a few things -- put  a behavior on cue and with spacial recognition (the dog performs the cue reliably no matter where you are when asking for the cue).  It also shows you how happy and smart this little toot was!  (If you are receiving this via your email inbox go to this link: http://bit.ly/13D6BQr, otherwise it's embedded on the blog post via the blog page below.)