Thanksgiving is a yummy, familly-fun holiday but you need to keep several tips in mind for your dogs' safety. Did you know that emergency vet clinics see more pets during the holidays than any other time (I think the same is for humans!). So don't let your dog be a statistic!
Here is an article I'm just copying and pasting as it has some good info. 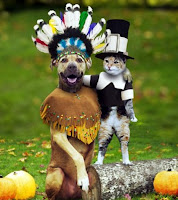 Keeping Your Pet Safe on Thanksgiving

Pet owners should avoid offering their pets leftovers from Thanksgiving dinner. Dogs, especially smaller breeds, are susceptible to pancreatitis. The pancreas produces insulin and enzymes for digestion and when it gets irritated serious illness results. If a serious case occurs, it can be life-threatening and may require hospital treatment.

Avoid feeding sharp poultry bones to cats and dogs. A turkey bone can splinter and become lodged in the throat or further down the digestive system. Bone fragments can cut the delicate tissues as they move down the digestive tract.

Food waste should go in the trash

You should also avoid feeding raw sweet breads, giblets or necks to pets as a treat since most raw poultry and meat has bacterial contamination. This can result in diarrhea or more serious illness. Many pets are adept at finding food on counter tops and tables, so keep your dinner out of reach. When disposing of turkey, double bag the carcass and move it to a secure garbage bin immediately after the meal.

Protect your pet from the party

If you are expecting a crowd for Thanksgiving, it may be wise to make up a special room for the pets, equipped with beds, food, water and a source of pleasant noise like a radio tuned to soft music. All of the hustle and bustle of a busy Thanksgiving dinner may be stressful for a shy pet, and a territorial pet may be unhappy with the intrusion. By restricting your pet’s access to company, you can also help minimize the chance that your pet will escape through an open door and get lost.
------
Have a safe, happy & good Thanksgiving!

If I build it, will you come?

I know that holidays are fast approaching and that means hectic days for lots of people, including myself! My daughter is turing one-year-old 2 days after Thanksgiving so I have a birthday party and Thanksgiving to mess with!
Anyway, I also know that several clients have stated that they want to do a class but this time of year is just bad. Noted. Agree. And I have the fix! We are going to offer 1 to 2-hour workshops each weekend. We'll do a different topic and cover different things. It's a one-time-attendance-only deal and you'll be able to get some training under your belt (and Fido's collar) before the holidays! 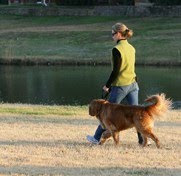 Here are some workshops we are holding and topics we'll cover. If you want to join in go to our enrollment page on our website and let us know you'll be there!
Posted by The Redheaded Dog Trainer at 8:30:00 AM No comments: 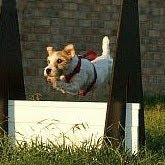 I know lots of people who will stop me during a lesson and say, "I bet your dogs are soooo good . . ." I smile sheepishly. You know that all depends on your perception. Sure my dogs know all their commands and obey them pretty reliably no matter where we are, among other things . . . but every dog owner defines his own dog's problems.
For one dog owner a dog that jumps on furniture may be the worst dog ever and for another it may be how they watch TV on Sunday nights, together on the couch. A problem isn't a problem unless the owner sees it as such, with the exception of some things (such as dogs who bite and cause harm.) 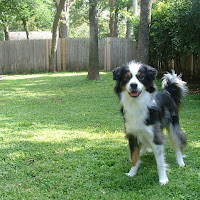 I just graduated one of my classes on Saturday and took my Jack Russell to the class. When I let him out of his crate to show them what I wanted to use him for he began to use my side as a spring board. One person said, "Oh, your dog jumps?!?!" with awe just not able to fathom that a dog trainer has a jumping bean for a dog! I could hear someone else say, "Well he is a Jack Russell!", followed by a giggle. My answer--yeah he jumps when he's excited and frankly I just don't care. It's not a concern of mine. He doesn't jump obnoxiously on guests as they visit my home and I can stop him mid-jump to request he do another behavior if and when I want him to. So I just don't have it listed as an issue for me. He can retrieve a ball 500 yards away and come back when I call him. I can call him away from another dog and he'll come back immediately, and those things are what matter to me. 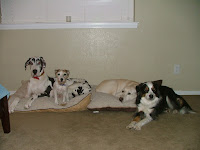 Each dog owner has to prioritize what they want their dog to do or not do. And often we have to think outside the box. I remember being at a dog trainer seminar that John Rogerson was speaking at. He's a British dog trainer that is just remarkable. I remember learning a lot of great things from that weekend-long seminar but one of the best things I learned was that you have to think outside the box. So many dog owners want to just get rid of a behavior and often it's much easier to teach another, more desirable behavior instead. It also helps you put a notch on your belt for one thing taught and one behavior gone.

The story John Rogerson told was that of a woman who had a Jack Russell (those terriers are just so spunky!) that would race insanely down the stairs each day when he heard the mailman drop mail through the slot on the door. He'd go to the mail, pick it up and rip it to shreds. Understandably she wanted this to stop. Now oddly enough a few years ago Cesar Millan had almost the exact same case. It was a Wesite and there were no stairs, that was the only difference. Now how each dog trainer approached the situation was completely different and I like John Rogerson's approach far better than Cesar's.

John Rogerson's Protocol: Teach the dog to go downstairs with you and sit and wait while you sift thru the mail. Each piece of junk mail you get, or any you would be tossing, give to the dog to rip up. End result: the dog learns to sit patiently until he gets his own mail to shred and is still happy as a pig in mud! The dog looked forward to this mail-reading-time with his owner each morning and so learned to be calm until it was "his turn". Five stars from me * * * * * 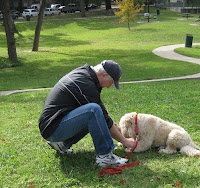 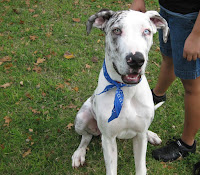 The class also had many other wonderful doggie tricks to show off--two dogs learned to "Leave it" for a treat that sat right on the top of their front paws (Dooley the Goldendoodle and Bruno the Great Dane puppy). Then Harry the Cavalier sat pretty and Neville the Golden Retriever gave a high five. 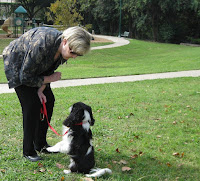 And then another couple of students did a little show for us too that I got on video. 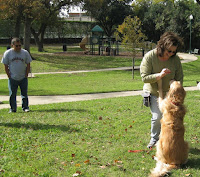 Rita and her Border Collie Bernice and Beth and her Weenie dog, Scrappers, both did this cute little number. Now you must know that Bernice did not like Scrappers so they were clever and had each sit in their "home base" while the other performed. I thought it was brilliant!
Posted by The Redheaded Dog Trainer at 1:02:00 PM No comments:

I just want you to know that training your dog to walk nicely on a leash, if the norm is tugging, is a heck of a chore. I get more questions about leash walking than a lot of other commands and the biggest is, "What kind of collar can I use to keep my dog from pulling . . ." The answer is: train your dog not to pull, a collar isn't the answer. Sure the market for pets is a billion dollar business so if you want a magic tool then they will make something that will certainly claim to do just that! The famous "no pull harness" and such. While these things may lessen pulling you must know that a pulling dog does so because he can and has been able to while you loyally walk behind him on leash!
I've held leash workshops and people leave frustrated because they think that it's going to be a magic workshop. They will have this wonderfully trained dog at the end of it. It will give you all the tools you need to train your dog not to pull but you have to put in some elbow grease to make it happen. Practice does make perfect.

Some dogs seem more difficult than others while some are just simply bigger and stronger and can easily get away with it more often, making the training that much more of a challenge. We are creating new and easy ways to help dog owners deal with these difficult and frustrating situations. If you feel at your Leash's end with pulling then let us know! We want to help and do a workshop just for folks like you!
Posted by The Redheaded Dog Trainer at 9:13:00 AM No comments: