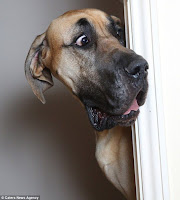 Have you ever had a dog that was a bit scared of something and  you thought perhaps if she just "gets used to it" she'll figure out it's ok? I see a lot of the mindset that if a dog is scared (or just unsure) of something that all they need is more exposure to that something in order to "get used to it". Unfortunately it doesn't work like that.

Here is the thing with stress and/or fear –– it doesn't just go away on its own or over time by forcing the dog to be in the situations and/or around the things that scare them or make them nervous. There is actually a term in psychology for this "technique"–– it's called flooding. You will find some dog trainers that use flooding as a training tool, and they will swear that "it works". Here is why some dogs appear to be getting past their fear or stress –– flooding causes dogs to shut down or present what is called "learned helplessness". This means the dog realizes it has no other choice but to just sit through the situation as it cannot escape so it just does nothing. However, while doing nothing they are mentally panicking, some a lot some just enough to make it uncomfortable. Either way, they are not coping, and they are definitely not "getting used to it". They are praying for the moment they can get away or go back to a place that's safe for them. They are also not moving past their previous viewpoint on the very thing you were attempting to get them "used to".

Let me try to put this in perspective. Let's say you are afraid of spiders and I put you in a room full of spiders. The spiders are in a huge enclosed tank, at the other end of the room. They cannot get to you. But you cannot leave. You have to sit there for an hour and try to just "see" that it's not so bad, I mean after all they are in a tank and across the room ––right?! However, likely you will begin to try coping mechanisms. This is a physiological response that the body does. This is whether you are a human or an animal. You go into survival mode. You'll probably be staring intently at that tank full of spiders. You probably will start talking to yourself, trying to calm yourself –– "see, they can't get to you, see they aren't so bad." You may start breathing techniques. You will probably talk to yourself some more. You will probably look over at the tank every 2 seconds. You will probably start to possibly think of worst case scenarios. What if they get out? What if the lid isn't on tight enough? What if someone forgets about you? . . . You will be hyper-focused on the spiders. You will be counting down until you can get the heck out of there. But what you won't do is walk out of the room and say "well that was great, now I'm not afraid of spiders! Thanks for that awesome session of flooding!"

I recall, probably 10 years ago, I was teaching a group class and a client in the class asked about how to help her dog "get used to people" because she's shy and timid around new people. One client that was in the class thought she'd give her two cents and she stated, "we just took ours on the Katy Trail all the time and she finally got used to people." For those not local, the Katy Trail is a very, very, very busy jogging and walking path that goes around a busy part of the huge city of Dallas. It has joggers, bikers, roller bladers, skaters, strollers and tons of dogs! It's seriously packed with people and dogs. It's too much for most dogs let alone a dog afraid of people! What likely happened to the client's dog that says "she finally got used to people" was that she continued to take her dog on the trail and the dog just tolerated it because it had no other choice. When a dog is in a state of learned helplessness they look compliant because they do nothing. It could appear to the untrained eye to be "obedient" (ugh I hate that word!) It looks like blind obedience but it's just a dog choosing to do nothing because it has zero options. This would apply here because on the trail all dogs are on a leash. A dog on a leash that's forced into a situation where it's not comfortable isn't going to do much of anything as it has no choices.

On another side of that some people could argue, "so what's wrong with the dog just getting by and doing nothing?" Why is this "learned helplessness" so bad? Sounds like they don't do anything bad so, meh. Why not?!  But here is the thing, mentally your dog isn't ok. They haven't learned to be ok, they've learned that they have no choice. I don't know about you but I like to have a dog that is actually ok with the thing or situation that makes them nervous, uneasy or anxious. I don't want to just put a band-aid on my wound if it's never going heal. Why can't I do something to make the wound disappear completely?! 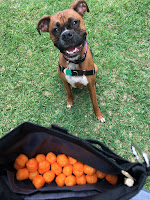 So how does one know if a dog is exhibiting learned helplessness, being shut down, or truly "used to" something? Great question! A dog that is not truly ok in a situation will show signs of stress. Now, the kicker here is that you gotta be a real Dog Decoder (by they way that's actually a dog body language app, go download that now, here!) with body language. This is where dogs will often show super subtle signs of stress so you'll need to be a great detective here. Things such as whale eye, licking their lips, tail tucked (or lowered heavily), head averted, eyes averted away, paw lift, eyes blinking, eyes squinting, panting out of context, heavy shedding, moist paw pads and even just sitting there staring and frozen (with a few of these others signals likely to be occuring at the same time.)

Now, remember reading stress signals takes you looking at the whole dog and really understanding what you're looking at.

Dogs that are "used to" or ok with something will show loose body, ears, eyes, mid-line tail wagging that's loose, often eliciting interactions and exploring things on their own without showing signs of fear or uncertainty. They will not just sit frozen. They will also listen to you when you ask for something most likely while the unsure dog –– or flooded dog –– will often seem to ignore you when you ask something of it. 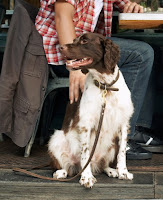 Here is the thing with science and psychology –– you can train a dog to be comfortable with things and situations by choice. You can do it the right way. You can do it so that with the proper training your dog will actually like going on that car ride that previously made her nervous. You can teach your dog that previously thought men were scary that they aren't so bad, and actually could even be good! Your dog will make their own choices and even moreover –– your dog will be confident as a dog and mentally balanced. That's the dog I want! How about you?

If you have a dog with any kind of fear, anxiety, stress or phobia please contact a positive-based trainer that understands how to properly use classical, counter conditioning and desensitization to modify behavior. You also need to have any anxious dog visit a licensed veterinarian that is well educated in behavioral medicine before implementing a training plan. Some dogs do require medication to aide in the process. This is on a case by case basis but no one should brush off the power of medicine when owning a fearful and/or anxious dog.

Need help finding a qualified professional near you? Hit me up in the comments!