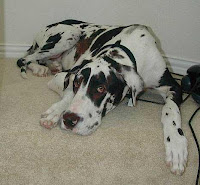 Well, most of you readers know that I lost my darling, sweet angel, Jake just this past New Year's Eve.  What a heartbreaker that was.  But it's taken me this long to write a post about the fact that I lost the love of my life, my Great Dane, "Amos".  We lost him on April 21st, just a little over a month ago.

Amos was an old man, 11 years, which is pretty ripe for a Dane.  He was the dog I had since I started my professional dog training career.  I got him at 8 weeks of age from a breeder outside of Austin Texas.  I had picked out the breeder long before she had puppies so I knew he was the one I wanted as I wanted a harlequin Great Dane.  He was the only harlequin in his litter born on April 3, 2001.

I had just moved to the Dallas area and lived with my sister in Carrollton around the corner from the Lewisville Petsmart where I worked.   The other trainer and I had a tiny little office there and Amos pretty much grew up in the Petsmart, going to work with me every day.  He was, of course, a huge hit being 1) a harelquin and 2) a Great Dane.    He became my demo dog and socialized with all puppies, dogs and people that came in the store.  He was the most laid back, mild mannered, tolerant dog.  At Christmas time he'd wear those doggie deer antlers and just walk around the store with them on like a trooper.

I used to attend lots of dog events and Amos would be my marketing tool.  He'd draw crowds and get tons of attention and the normal "Great Dane Owner Questions".  My husband (who was my boyfriend at the time) hated taking him places because we had to answer so many questions!  -- "Whoa! Does he have a saddle?!"  "How much does he eat?!"  "Do you have a huge yard?!"  "He's as big as a horse!"  "How much does he weigh?!"  "How tall is he if he stands on his hind legs?!" 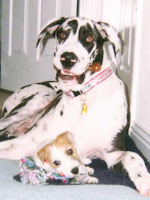 I recall him being just about the easiest puppy I've ever met.  He never chewed anything he shouldn't, he was potty trained in about 2 weeks and he was quiet and slept all the time!  As he got older he became quite fond of the couch and sleeping became his all time favorite.  Truly the easiest dog to care for aside from poop scooping and large amounts of food to feed!

He was what many trainers refer to as their "Heart Dog" which is basically the dog that holds the most special place in their heart for one reason or another.  I love all of my dogs incredibly dearly but Amos was truly my heart dog.  He was a huge Mama's boy and loved me more than anyone else in the house.  He would be waiting by the front door to greet me every time I came home.  If my husband came in the house first he'd peek around him to be sure I was following behind him, when he saw me he'd come to me and rub his head against me as if to be relieved I was there.  He was a big ole baby.

When Amos was 19 months old I decided I wanted another dog and this time I wanted a small dog.  I wanted a challenging dog so I chose a Jack Russell Terrier--"Trevor".  Amos and Trevor are the only dogs to date I've paid for from a breeder.  They were instantly bonded and it was so cute.  Amos literally seemed to "look out for" Trevor in all situations.  And Trevor always loved Amos more than any of my other dogs. I have scads of photos of these two together, snuggled up.  A real Mutt and Jeff!

Amos endured many things with  me: several roommates, many moves, many dog classes and tons of dogs that came in and out of my house.  He was with me back in my single days and he attended several parties and a couple of outdoor adventures to lakes and rivers with friends.  Amos was truly the rock of my bunch and he was the glue that tied them all together. 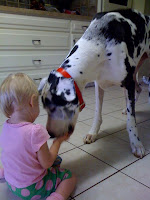 I dreaded the day I would lose him starting a few years ago when I knew he was getting up in his years.  I always wondered how I'd make it without him, what would I do?  How could I continue as he was my foundation?  And it's been  hard.  It's been harder than anything else I've had to do in my life to date.  I know bigger things will come but right now this is it.  I still come home waiting to see that giant head thru the glass in my front door, but it's not there.  I still sleep sideways in bed thinking there is a large beast taking up the bottom 3/4 of it.

Losing two of my very, very best dogs in a span of 4 months has been one of the hardest things for me especially with what I do for a living.  My dogs are my heart and soul, each one for different reasons.  Amos was the best pillow, huge, non-moving and he absorbed lots of tears for me over the years.  He was truly a graceful creature who gave me a soft place to fall...  I love that boy and I miss him terribly ...

Here is the tribute video I did for him. (Here is the link if you cannot view below: http://youtu.be/1wqw9UEaEQw)