Stop messing with your dog while he eats!

Yeah this blog title is abrupt, right?! But here's the thing . . . somewhere back when someone gave the advice to "put your hand in your dog's food and mess with it while he's eating so he gets used to you doing that and he won't become aggressive around his food . . ." Sadly, this advice will do no such thing, and at its worst it will actually cause your dog to become aggressive around food. This is called Resource Guarding behavior.

Guarding things isn't a totally abnormal behavior in canines but it isn't acceptable or safe behavior when we have to live with those dogs and give them all the things that they deem as "resources". This is especially true if/when children live in the home or are around these dogs often. This can range in manageable behavior to dangerous behavior.

For dogs resources that are valuable will vary from dog to dog but most dogs feel that these common things are valuable resources –– food, toys, treats, bones, beds (or sleeping spots), and sometimes their people (or just one person).  If a dog feels that any of these valuable resources are at risk of being taken away and they are conflicted about that they could start to show resource guarding behaviors when around these things. Resource guarding behaviors usually look like one, some or all of these behaviors –– dog lowers head, growls, snarls, snaps, bites and/or lunges to tell the offender to back away and "this is mine, you cannot come near it!"

It should be known that some dogs will live their whole lives and never guard anything or show any signs of stress when someone comes to take something from them. However, it's still always a good idea to never test a dog or do things that could possibly cause a dog to feel the need to become a resource guarder.

Sadly, this behavior can be taught and when it is no one ever knows that's what they have done as no one ever intends to teach their dog to become aggressive around resources!  I've heard some really poor advice given to people (or that they've read somewhere) on ways to "prevent your dog from becoming a resource guarder" which actually will do the very opposite for some dogs and teach them to actually become resource guarders.

The old advice to put your hands in your pup's food when he's eating or mess with them while they eat is some of the worst advice you could ever take on this matter. This will cause more stress and likely teach a dog that may have never felt a need to guard suddenly feel the need to do so. Why? How? Well, let's use you as an example. You're sitting down with your meal, about to enjoy a bite when your spouse reaches over and starts putting their hands in your mashed potatoes. They do this every meal and finally one day you slap their hand as you see them reach over toward your plate. You've had enough! You just want to eat in peace!  While do get that dogs aren't humans, the analogy is pretty much the same only dogs have teeth to use as "back off" signals rather than words or hands that slap!

Messing with dogs while they eat in any fashion builds frustration, and sometimes builds such frustration that the dog becomes aggressive about it. They literally just want to eat with no on messing with them. So, it's only going to teach the dog that being messed with when eating is super annoying, at best. At worst, it will teach a dog that they should defend their food so that the annoying humans will back off and let them eat in peace. 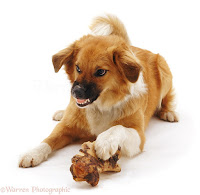 Often dogs that are not confrontational will develop some behaviors around food but these behaviors may not actually develop into aggressive or dangerous behaviors. Something that I often see with a dog that is uneasy about someone taking their food or just a perceived threat around their food is that they become incredibly fast eaters. They will almost inhale their food. They feel very uneasy so they eat quickly to get the meal over with so that they can be done and hopefully have no one mess with them. Some dogs will start out what we'd call "fine" but then develop some more concerning behaviors due to how they are treated when around food or some other things that may cause them to have preconceived notions around eating.

Now, with all of this said you should know that some dogs that are resource guarders are not this way due to some poor advice that the owners followed through with unknowingly. Genetics has a huge role in resource guarding behaviors and some breeds are more predisposed to guarding behaviors than others. So, sometimes you'll have a dog that resource guards without any past behaviors that would or may have caused them to do so. Some dogs will become resource guarders due to circumstances they lived in such as living with a lot of dogs and resources were scarce or living on the streets and resources were scarce. There can be other reasons that dogs guard resources that may not having anything to do with associations made due to humans and their interactions around food. 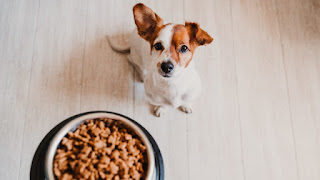 All that to say that it's important to know that we should be leaning towards teaching dogs that good things happen when people are around food, so that resource guarding behaviors never become a thing in the first place!

So what does one do to prevent resource guarding from happening*?
Note: If your dog already exhibits some resource guarding please seek a professional's help first and foremost. The following is only suitable for dogs that are show no signs of stress, frustration or aggression around their food bowl currently*.

Make eating with people around = good things! When going near your dog's food just casually drop some high value food into their bowl, then just walk on by. This could look like you grabbing up some little pieces of cheese or boiled chicken, walk by and drop several pieces of that into your dog's bowl. Then just walk away. Say nothing. Do nothing but drop the food in and go.

You could call your dog away and feed him higher value food and then let him return to the bowl as well. However, I'm not as keen on this one because it could possibly cause some frustration if they are interrupted while eating. Interruption while eating can be a reason for frustration build up and/or anxiety to build up. So, if you use this little technique be sure to be 100% sure your dog is enjoying it and it's benefiting the situation and not building stress or frustration. If you're not sure then nix it and just stick to the dropping the bowl thing!

I won't go into a detailed bit about what to do or not do any further as this can be such a problematic behavior that I feel a professional should always be consulted for anything related to resource guarding. There is a great ready by Puppyleaks here with much more detail and info on resource guarding. I do recommend you read it!

*Disclaimer: Resource guarding is a serious behavior. If your dog is a resource guarder it is advised that you seek the help of a professional. Resource guarding won’t just go away, and it tends to gets worse if not managed properly. A professional is the best course of action even if you're unsure whether your dog's behavior is safe or unsafe. If you need help locating a qualified professional let me know and I'll help you find one. 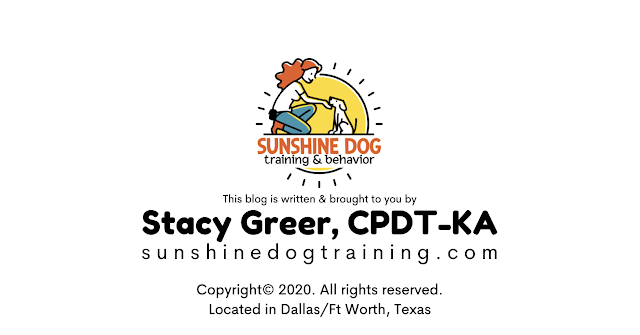