*** PLEASE NOTE: This blog post has been updated to a newer version! Read the new version here.***

A question I hear often and sadly there is just so much going around with dog training these days the answers would be different from every dog trainer you'd contact. So the question is somewhat difficult to answer and more confusing for the dog owner to grasp when they've been researching different things on this glorious internet, now televised dog training shows and books abound. The bigger question that usually follows is " . . . so how do I know your way is the right way? . . ."

I pause and take it in as this would be the same as rearing children. Everyone will have something different to tell you, why you shouldn't do this or that or what is right or wrong or downright awful. I simply answer, "You don't know that mine is right but you will see the relationship change for the better with your dog and you will never use any physical means to punish your dog. . . ."

I personally believe that humans and dogs need a very middle of the road version of correction that gets the point across without doing harm physically or mentally. Discipline actually means "learning" so discipline is not punishment. We often interchange the two, which is a mistake. The definition of punishment is "a penalty inflicted on an offender through judicial procedure; to deal with roughly or harshly". There are definitely forms of punishment that are not harsh or harmful but we often immediately think of harshness when presented with the term, punishment.

Discipline teaches a lesson, and when done properly the consequences should prevent the undesired action or behavior from reoccurring. Punishment can do the same thing but often when punishment is relied on too much it breaks down the mental stability of the subject being punished.

With punishment we use too much emotion and once we raise our emotions to a high level with a dog they immediately see us as weak. While it may scare the beejeezers out of your dog for the moment that is all it does--work for the moment. The dog will concentrate on the actual punishment, not the behavior. 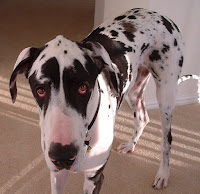 If you discipline correctly you should see the undesired behavior go away within a short time. Often people have been punishing their dogs for the same thing over and over again. This is because it's not working! A good example is a client I have has a dog that reacts on leash to other dogs--barks, goes wild, sometimes shows teeth. Her husband said to me, "Well if I sharply say "NO!" and then jerk her back she'll stop." My response, "Then why is she still reacting if your punishment works?" His punishment only works for a moment but has no long term effects on the behavior.

You also have to take a step back and remind yourself that you have a dog, not a baby. As much as we have dogs that serve as children they are still dogs. They still think like a dog and learn like a dog. We have to consider this so that we can help them with everything they learn and do.

I had a client many years ago call me out to help teach his black Lab to sit nicely when people came into his home instead of jump. When I arrived he opened the door and the dog, of course, became excited but was very politely in a sit right by the door. She stayed seated, was just a dear of a dog. She was about to pop out of her position and the man began to count, "One, two, . . . " I said, "What are you doing?!" He said, "She knows if she hits three she'll be in trouble!" I looked at him and said, "You do know this is a black Lab and not a kindergartner, right?" He wasn't too pleased . . . then we sat down to talk at the formal dining room table and the dog sat in a chair next to us as he fed her from a plate from his china collection . . . 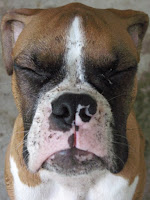 So then what is a good correction? I've been babbling on forever . . . Well remember I said dogs live in the moment? Well make a list of things your dog loves, likes and hates on a pretty regular basis. They can't be people. List 5 things. Most likely one of those things will be around when your dog does something undesirable. Stop and say, "Right this moment what would my dog like or dislike the most?" Now use that, whether you are disciplining or teaching a new behavior.

Let's say your dog really dislikes being left alone and isolated. Your dog jumps up on your counter and grabs a piece of cheese. Immediately take yoru dog to a time-out. You can use the crate or a bathroom or laundry room. This will not ruin your dog's view of his crate unless you do this with a lot of emotion. The punishment here is what the dog dislikes most--being isolated.

Ok. Let's say your dog doesn't mind being alone but man oh man does he hate being brushed. So when your dog jumps up on the counter to grab something you take him off and brush him for a good minute or two.

Every dog has something that they will avoid if they can. The punishment has to fit the crime but also has to have such an effect that it will cause the offender to think twice about repeating the crime. If you simply yell at your dog, although he won't like it, for stealing the cheese off of the counter he wont' mind so much. Yelling isn't really so bad and the cheese was worth it! But if your dog despises being pent up in the bathroom then you have your magical trick to stop the behavior! Most likely that consequence will not be worth the cheese! 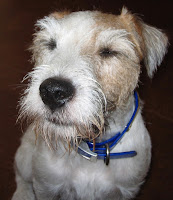 If you are having issues with a certain behavior (or two) let me know. Don't try to be a dog trainer from what you see online or TV. You need a pro in the home to assess your certain situation. Dogs all have different personalities and ways of dealing with things so don't do anything without consulting someone first!
Posted by The Redheaded Dog Trainer at 3:44:00 PM