It's Sunday morning. Hubby and I already took a trip to Starbucks, played a game of "Words with Friends" on our iphones and took 2 dogs to the park for some play . . . which has lead me to my post for the day . . . which is a long one, but I do hope you take the time read it all.
I find daily things I could post about in order to educate dog owners about responsible dog ownership and training, but I don't know that it would 1) get read and 2) be as important to others as it is to me, and 3) I don't have time to post daily! However, I'll ramble about a few important things in this post, my "Sunday Chronicles". 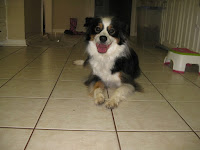 After returning home from Starbucks I looked at my poor dogs, namely my BC/Aussie mix and Jack Russell, as they are my most active dogs. My poor canine buddies have been on the back burner quite a bit since the birth of my daughter, Sophie, in 2008. I looked at Noah, the BC mix, he wore his big happy smile he always has and I said, "You guys want to go to the park?" Trevor, the Jack, knows that word he got the Jack happiness and began to bounce like a jumping bean. If you have a Jack you know the jumping-bean-bounce I'm referring to.

I keep a JanSport backpack full of doggie items for special occasions only; it hangs on a hook in my laundry room. The toys that reside in there are extremely high-value rewards because they only come out every now and again. When they do come out, they are used for training rewards which makes them extremely fun and exciting. My "doggie bag", as I call it, has the following: a Chuckit! ball launcher that holds an orange rubber Chuckit! Ultra ball, a Kong Wubba, a cheap small, green, rubber squeaky ball and K9 Superfuel powder (aka Doggie Gatorade) that I add to water. On the days that I use the bag I toss in a ziploc baggie of Natural Balance treat roll, cut up into tiny pieces, and my camera (of course!).

Hubby and I loaded Trevor and Noah up in my Honda Element and headed to the River Legacy Park, which is about a 10-minute walk from my house, 1-minute drive! This is an amazing park--huge, huge, loads of grassy area for doggie play, pavilions, picnic areas, hiking trails, biking trails . . . It's remarkable. Great for dog training and proofing.

I noticed on the way to the park, the LOST DOG signs that still hung on the posts on each street corner in my neighborhood. They have been there for about 2 weeks now. They have a picture of a cute German Shepherd puppy, looks to be about 5-6 months old. I remember seeing a dog owner walking a young GSD puppy a while back. I wonder if it's the same puppy. My husband remarks, "Guess that puppy is still missing . . . " This confirms how important it is to do several things as a dog owner. . . .

Many dogs that go missing primarily stay in a backyard when someone is away--while they are at work all day or even if they leave to go eat dinner. This is where the dog lives, except maybe at night or even for a bit in the evenings when someone is home. This is a common scenario, albeit a sad one. This is also the reason why the dog is gone--they are under-stimulated, bored, lonely, and/or possibly unaltered (not spayed or neutered) which dramatically increases the risk of escape.

Dogs are designed to be a human's companion. Dogs, except in some uncommon cases, prefer a human to a dog even if they do enjoy the company of a dog. So if a dog has a buddy in their yard most likely they will just devise a plan together for escape. Now you have two bored, under-stimulated and sad dogs.

There are several things you can do to prevent your dog from becoming lost, or to help him be found. 1) Crate your dogs inside your home when you are away. 2) Microchip your dogs . . . and register the chip! Many dogs are microchipped (we love 24PetWatch) with an unregistered chip, causing the chip to be pointless--so register the chip! 3) Train your dog to have a perfectly proofed recall, i.e., teach your dog to come to you no matter what!

I think that even a lost dog with a solid, proofed recall would be found soon even if some of the other factors were not in play (if the dog was not already miles away, of course.) There is a woman who has started a group on Facebook (Find Kingston) for her lost dog. This poor woman is very obviously a responsible dog owner. However, every time I read her story all I can think is--if only that dog had an incredible recall I bet she'd already have him home. Her dog became afraid when she picked him up from a doggie daycare, slipped out of his collar and took off running. That was in May. She's still looking for him. I give her Kudos as she's hired Doggone Detectives--which utilize Search & Rescue dogs to find missing pets, made her Facebook group, posted signs; she's working hard to find her buddy. The dog has even been spotted several times, but he's still not home. So, I cant' help but go back to thinking if that dog had an incredible recall he would have come back to his owner within a few hours of her searching. 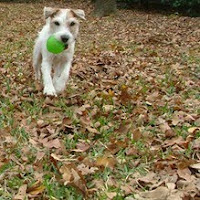 Trevor, my toot of a Jack Russell, is a mere 13-lbs and so he has escaped under our fence, and this was when he was outside for 10 minutes on a potty break! My dogs are never in my yard, unsupervised, for more than 15-20 minutes at a time. Never. So, I discover Trevor is missing, usually because Jake, my Lab, gives off this distinguished bark as soon as Trevor is under the fence. It drives Jake insane and he goes nuts. A few times,within minutes, he's already several streets away. Twice I can remember having to get in my car and drive around. Of course I panic--which way do I go first? Do I take this neighborhood or this one? I drive about 2 mph and yell out of my window, "Trevor! Come! Trevor! Come!" Every time, once I get close enough for him to hear me, I see a little white fuzzy dog, panting heavily, bolting toward my car. 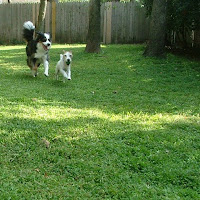 He would come straight to the car and jump in as soon as I opened the door. I would give him a ball as a reward. Yes. Reward. Reward him for coming. His actual escape was long ago, the last thing he did was come to me, so a huge reward it is! I was always so relieved that I'd hug and kiss on him then give him his favorite ball, that I grabbed before I left the house. The times I've caught him seconds after slipping thru the hole in the fence, I called him and his little head would poke back thru the fence--Yes? You rang? I called him back thru the hole and rewarded him for coming back into the yard. Little twerp. I love that twerp. . . . We finally got a new fence a while back and haven't had any issues since then. We had a heck of a ratty fence with many opportunities for escape for a little dog!

Here is a little video of our park adventure today, along with some tips on recalls. It was a short one. I had to allow my dogs to not get overheated, don't forget to read my post on that from a week ago: Heat & Dogs.
Posted by The Redheaded Dog Trainer at 11:10:00 AM