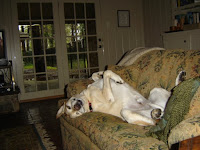 I've been working a lot lately so I come home at nights with dogs on the brain. Heck, I go to bed with dogs on the brain . . . why else would I be typing this at 1:45am? Ok . . . with this comes the difficulty I run into on a consistent basis . . . dog owners.
I personally try to adjust my training to what will work but also what that particular dog owner can deal with and will be able to do. However, there are often just black and white answers to dog training and many people don't like that. All dog owners must know that owning and properly raising and training a dog is not easy. It's just like kids. They take work, patience and dedication . . . and yes, you can do something that really screws them up if you're not 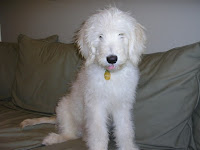 Sadly there is no magic pill for dogs or behavior modification. I'd be retired and I wouldn't be sweating the bills each month! But let's face it, reality is here and for those who want that simple life, the dog that "does what I ask because he should just know" and for those who do not want to put one drop of elbow grease into dog training . . . well, you may just be really sad in the end. You'll also have a very poorly mannered dog, to say the least.

I get lazy with my own dogs. I know lazy. I know the difficulty in the work, the up-keep, the consistency. I know this. I take for granted that I have the tools to "fix" anything should I need to. So my dogs often suffer because of this. But I have to say that dogs are only as good as you allow them to be. They are only as well trained as you allow. There is no limit to what a dog 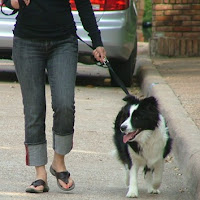 can accomplish but dog owners will put a limit on the dog if they don't have the time or energy or patience . . .

I'll never forget one time when I was in college and I had my first dog. This dog was a nightmare of a pooch. I had no clue what I was doing and the dog turned into a Cujo-maniac that actually got me into dog training . . . the only good that came from that dog. I loved that dog but no one else did and one day I decided I was going to get him all trained. I was going to find a place that would train him for me and I was going to get him trained. I called around and found a place that would take him for a few weeks and then return him. I called to speak to the woman. I'll never forget this. The reason I'll never forget it is that I've said it many times to people and many times

I've actually pissed people off by doing so. But I don't regret it one bit. It's the truth and this woman stuck it to me that day and it's never left me. She answers the phone, I ask some questions about the training and then she says, "So why do you want to send your dog off for training?" I replied, "Because I don't have time to train him myself . . ." and she ever-so-quickly retorts, "Then why do you have a dog?" I remember not knowing what to say. I was literally speechless as that question rang through my ear and it just hit a cord. This woman was right. I somewhat stuttered, "Uh , well . . . I mean I don't have time to do it right or do it to the degree he needs . . ." and she said, "Well if you can't spend time training your own dog there is no sense in sending him off . . ." I honestly could probably pick that lady's voice out of a line up today if I had to.

Sad thing about that is that I used to do board-n-trains off the bat. I mean I would take dogs that belonged to people that I didn't know and keep them for a month or so for training. Of course I could train the dog. The dog would be perfect for me. 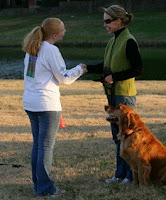 Then upon the return to it's owners--the problem from the start--the dog would become the same dog as before. Granted the dog would respond to some commands and such but behaviors would reappear. It's all about the owner, it's all about communication, or lack-thereof. I no longer offer to do that type of training unless I have a good reason for it. There are a few instances where it can benefit, notice I said "a few". However, if the dog has had no formal training or the dog is just driving the owner mad then sending it to boot camp isnt' going to fix the problem. There is another issue that needs to be uncovered, whatever that may be.

There is a good reason we call dogs Man's Best Friend. But how are you your dog's best friend if you aren't there to coach him through his learning lessons? His behavior lessons? Nothing about dog training is easy. Dogs are animals. They don't speak our language and almost all of it is excrutiatingly difficult to comprehend. We must be able to read our dogs, listen to them and respect what they are saying. We must train without pain, communicate so that we can understand each other, and set rules and boundaries from the beginning. 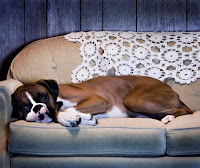 If you want a pet that is easily understood get a plant. If it's behavior is bad, let's say it wilts on you, most likely the answer is to water it more. Simple enough. Problem solved. Now that's what I call an easy pet!

But I cannot tell you the absolute sheer joy and rush of excitement you can get from a well-trained dog. A dog that you can say, "That's my dog. Yes, we have done a lot of training to get him to do that! . . ." It's like earning enough money to get that dream car you've always wanted. You can drive it around and show all your buddies. A good dog is the same thing. And it feels good to know you can pat yourself on the back for your dog's abilities! Too many dog owners don't even give themselves enough credit for their dog's good behavior, let alone do they acknowledge it to the dog! If your dog can sit on command then you've done some good! You did that. You taught your dog to obey a command--way to go! You have to take that as a huge victory.

Dogs do not know English. Teaching an animal to respond to a command is huge. It's amazing and we just take it for granted. Dogs have been around forever and so we expect them to sit on command. We expect them to not pee on the rug. We expect them to not jump on guests. But when they do indeed do these seemingly trivial things we don't respond like we should and take for granted that we have this dog in our lives. It's a dog. A dog for goodness sake. You taught it to understand English, several words most likely.

Do you realize how amazing that is? A four-legged, canine with teeth that are designed to shred meat. You can hug this animal, kiss it on the head and also teach it to bring you dropped socks. (I had to mention that one, I taught my dog to do that and yes, I'm bragging. I'm proud of him for learning and doing this great command!)

So bottom line here is: there is no simplicity to dog ownership and be very proud for anything you have accomplished. Also, moving forward praise your dog like mad when he does something right and praise yourself for teaching him how to do something right! And if you want a simple solution or quick-fix to a doggie problem . . . let me now where and when you find it so I can pay off my mortgage!
Posted by The Redheaded Dog Trainer at 1:42:00 AM