Well here we are again with my sweet, tough boy Jake the Lab.  Many of you know him, many of you have contributed to his ordeals in the past but we've sadly come to a really bad place.  I'll type up the story for those who haven't been in the loop [this time around].
Monday evening Jake refused dinner.  Red flag for any of my dogs (side note: one very good reason to never free-feed your dogs!)  He vomited about 6 times from dinner time until the morning, all in the manner that it was hardly anything which meant probably a blockage.  He also hadn't had a bowel movement--huge red flag and another possible sign of a blockage.
X-rays showed his bowel is dialated and that there is something in there.  The interesting part about Jake is that since all of his crazy stuff from the past he's a "horse of a different" color.  His intestines are a mangled, scarred mess.  And it seems that they are always filled with gas--not normal.  Actually I think even the vets are all surprised the boy is still around with all the plumbing issues he's lived with!  So with this our wonderful, dear surgeon, Dr. Joanne Franks at the Dallas Veterinary Surgical Center in Grapevine (she's done 2 of his surgeries) has said that the reality is that she could open him up but may not be able to swim through all his insides due to all the scarring.  She already warned me last year that if something just like this happened again the odds were highly stacked against us.
Anyway, I took him in Tuesday so they could at least give him fluids, try everything possible to see if by some miracle he'd pass whatever it is in there.  Wednesday she calls and says they could do this and that but asked me about cost as she knows I am not financially stable (seems like a forever thing!).  The costs for the other things were too high so I elected to bring him home yesterday. 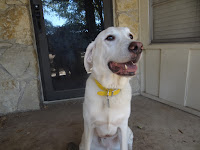 He vomited 4 more times at home and is very obviously uncomfortable.  I can't imagine what he feels like, poor guy.  Still hasn't eaten a meal since Monday or had a bowel movement.  Not good, not good at all.  All I can do is think what if she can go in there and find something, remove it and we can just move on to recovery?  What if he does in fact survive this surgery by some miracle?  I mean he's been so strong this whole time.  What if?  But of course the problem is that we definitely haven't the funds for surgery.
So the sad truth has come to this, we have to elect humane euthanasia if we cannot do the surgery.  Even with the surgery it is definitely possible that he still doesn't make it.  But I can't help but think that I'm a horrible person for not at least trying the surgery.

We would immeasurably appreciate any donations. A dog training forum I'm on convinced me to do another ChipIn. I was reluctant, after doing so in the past, as I know that this time of year and this economy is not kind to anyone.  So I removed the chip off my shoulder and did it--again.  And I'm actually going to apologize for doing so.  It's not easy to admit to failure and it's not easy to ask for money, especially since I've done so in the past.  Humility has gotten to me.  So thank you, thank you and thank you to all contributors.  I cannot express the gratitude enough.
Here is the ChipIn I've created. If you can't see the image below, just click here to go to his donation page.